During the first and second quarters of 2022, the Company undertook a diamond drilling program that totalled 6,002 meters of NQ sized diamond core over 12 drill holes. A total of 10 drill holes, totalling 5,201 meters were completed on the Falea licence and 2 drill holes for 800 meters on the Bala licence.

Highlights from the drilling program include:

Commenting on the results, Govind Friedland, Executive Chairman, said, “We are extremely excited with the results from our 2022 drilling program at our Falea Project, which continues to show promising potential. The IP data, analyzed by Computational Geosciences – the global leader in geophysical data interpretation, shows targets with a strong correlation with known uranium mineralization, which means we now have a clear roadmap of targets for our next drilling program. Falea is clearly a compelling and highly prospective assetI and we look forward to expanding our exploration program, particularly now that we can focus our efforts in the most prospective areas.”

The drill program was designed to target mineralisation in the Birimian rocks below the sedimentary mineralisation based on Induced Polarisation (IP) targets, and evidence from historical drill cores already reported copper and gold mineralisation. Within Falea license three separate structural targets, were defined (see figure1):

The results from Zone 1 intersected the Road Fault and highlighted the faulting and repetition of the geology in the area. The results show:

The results from Zones 2 and 3 are very interesting from the perspective of future uranium exploration on the Falea licence, although they did not intersect any major mineralization in the Birimian. These results show that the gradient IP can be useful for mapping the major structures that support uranium and copper mineralisation. There is a strong correlation of copper mineralisation with high IP response, and consequently with uranium, as copper and uranium tend to occur together over most of the Falea deposit (see figure 2). Several target zones have been identified based on this relationship, which will be taken into consideration for the Company’s next drilling campaign.

In Zone 3 the drilling results and the gradient IP clearly show that the Road Faults positioning has historically been misinterpreted and that it should expected to be positioned between the recent drill holes DF-931 and DF-932, with the later drill hole reporting 2 meters at 7,260 ppm copper and 42 g/t silver. As a result of this finding, the exploration potential of this area will be re-assessed, with the potential to connect the Falea North and Central deposits.

The two drill holes completed over the Bala licence (see figure 4) were drilled along the IP section, and the drill holes were orientated westward targeting expected structures that were assumed to be in a similar orientation to the Road Fault. The results from Zone 2 and 3 indicate that future Bala exploration should consist of expanding the IP survey area and target future drilling onto the IP highs. 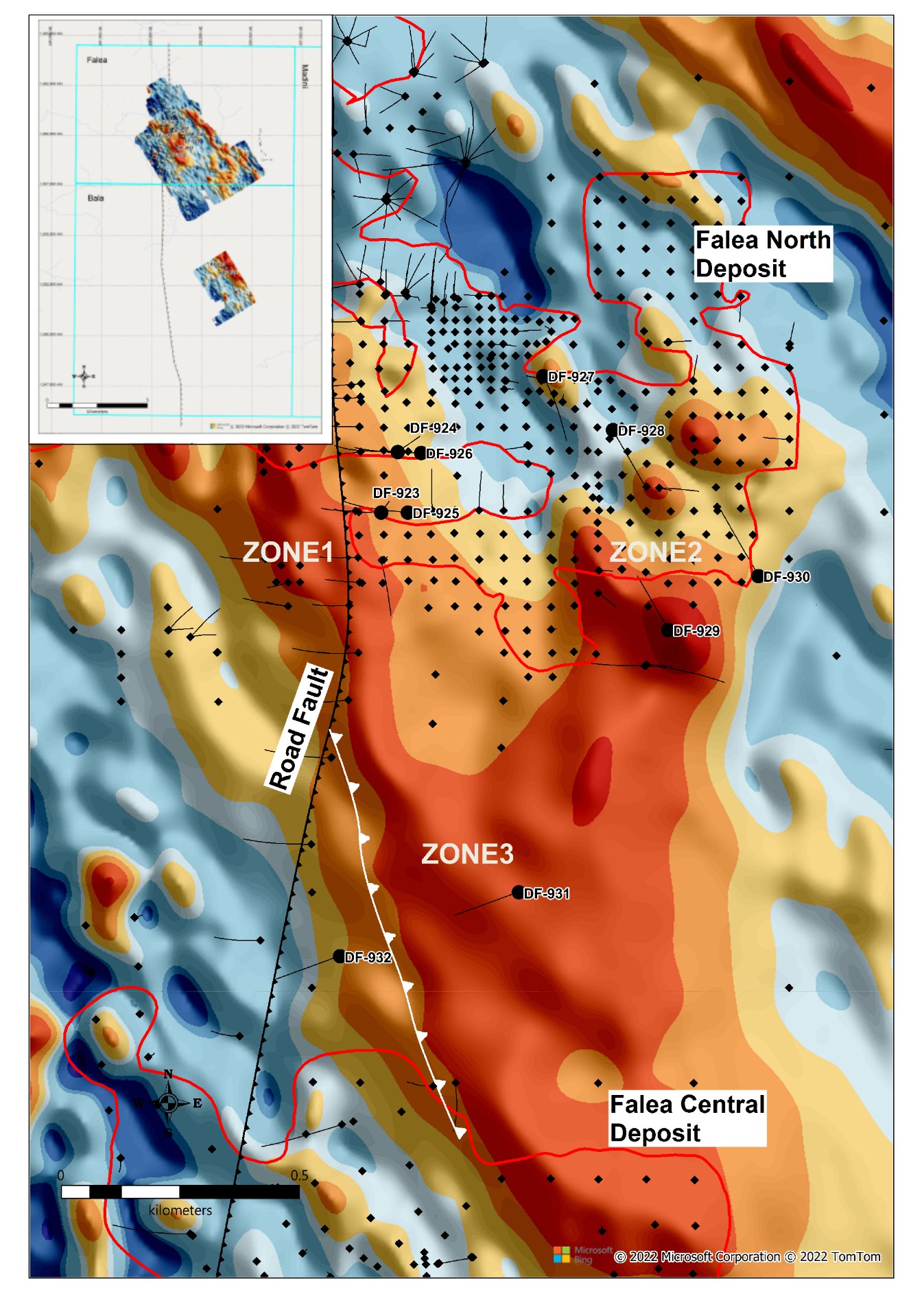